Lately we have been hearing about many incidents of rape, torture and murder. Babies that can’t stand on their own, little girls who haven’t even come of age, elderly women who are too feeble to walk – nobody is an exclusion. It is appalling that of late victims of many such shameless acts have been little children.

A recent incident that came to light – the rape and murder of an 8 yo girl in Kathua is extremely tragic. It is a shame and no amount of condolences can earn us her forgiveness. It was a horrendous act and the maggots responsible for such heinous crimes should never be pardoned.

This incident had me all tearing up. It filled me with anger. If it was in my power to punish these animals – the ones that destroyed the lives of Aasifa, Nirbhaya, and the many other women we have not heard of, I would have them brutally castrated. That these men could be so consumed by carnal cravings that there is no regard for another human’s life is just disgusting on so many levels. They should be punished severely. Only such severe punishment to those accused can serve as a warning for the upcoming rapists.

Yes, Maybe. But is that the solution? Will that stop rape incidents in the future? Will our daughters and mothers be safe from tomorrow?

Most of my friends are  young mothers. I am sure that they have heard about these incidents and as are as shocked and enraged as I am. Some of the friends I spoke to are already worried for the safety of their little daughters. I do not have kids, but sometimes I catch myself wondering if I can guarantee a safe society for my unborn daughter. I cannot bear to even think that something horrible like that can happen to her. That is my precious daughter and I will do everything to keep her safe & protected.

But what could be worse than some ghastly assault befalling my daughter is if my son turned into a sex offender. Yes. I said that.

We talk about how best we can keep our girls safe and all that. But safe from what? We all need to take some time to think about it. Just punishing the accused assaulters is not going to stop all these sexual crimes against women. Raising our sons to respect women will. A long shot, but well worth the try, I think.

Maybe it is just as simple as that. Maybe it is time we start thinking along those lines. Maybe we need to eliminate gender stereotyping right from home. Right from when we start raising the kids up.  It is not just about sexual crimes against women. It is also about verbal abuse, harassment, pretty much everything under gender based violence.

Don’t let our boys get the idea that girls are weak and that they can boss over the girls. I have seen that happen an uncountable number of times. Let us stop telling the kids that cars and bikes are “anna” oda toys and stove and skillets are “paapa” oda toys. Teach the boys to respect their sisters.

It is funny that sexual abuse is so common in our country and yet sex education is taboo. We need to teach our kids about what good and bad touches are. We need to train them to discuss stuff with us.

I read an article about how a 5th std kid suddenly started hurling verbal abuses at his younger sister everyday. The parents later found out that he had teamed up with some kids from his tennis academy to play a video game that involved beating and tying up girls. The game influenced the kid to demean his sister – a girl. Left unchecked, this surely would go on to influence this thoughts, actions as he grows older. These are places parents need to be
more careful. Yes, kids need to have their space. But they also need to be monitored. They need to believe that parents are friends and not condemners.  They need to know, and know for sure, that they can always fall back on the parents.

Unless the boys we raise now are taught to respect and value girls, I think these rapes & murders will never stop. Even long after we have settled in Mars.

I wrote this in an emotional rush. I don’t even know if it makes sense.

So I got all started on a new section – bric-a-brac cabinet to show off some knick-knack I deem precious and cool. And yet again I failed to make it past one post. Lugging this heavy failure around, beaten and pummeled by laziness, I have now risen from the ashes to write a post under That Was The Week That Was ( twtwtw, if you will).

Where I live, a week consists of roughly 12-20 days. I live in Omicron Persei 8. And nothing worth writing a post about happened the last week. Although one could say that the kolusu incident deserves a significant mention.

I was on the train the other day when this gypsy trinkets seller charmed me into buying a pair of seed-bead anklets. Now, I am not an anklets person but they were so dainty and I just wanted to have them. So, I bought a pair. YAY! Look how pretty they are on me. 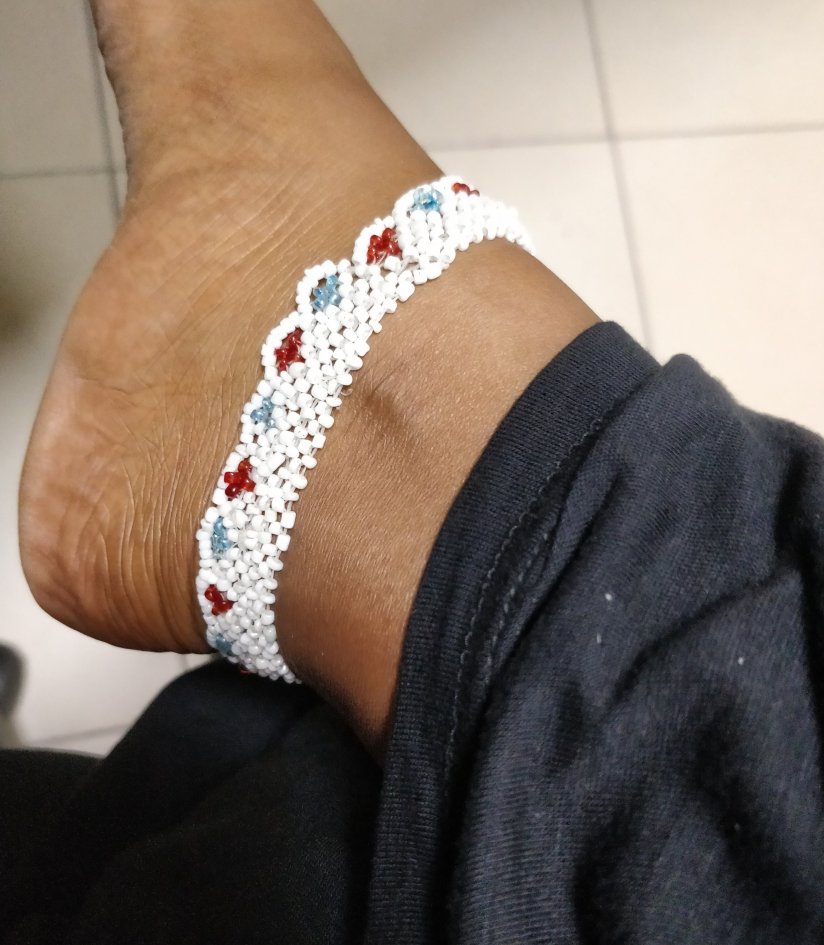 But that is not the end of the story. The anklet doesn’t have a hook mechanism, but the gypsy had deftly slid it up my foot. My brain was probably on stand by coz I did not for a minute think how I would remove it at the end of the day. And when said end of day arrived, I couldn’t remove it – No surprises there. The only way to get it off was to cut it. But it looked so pretty and I did not want to do that. It was the effort of a poor and industrious gypsy woman and I did not want to snip that labour into shreds. (But I also kinda think she cheated me, and I should have bargained).

It has been a week now and I am still wearing it. I wear it to work. I wear it when I am sleeping. Yeah, I like that it is hippie. I like hippie. But my love for it is slowly turning cold now. I am no longer excited about it. Of course, When i am on the toilet seat and there is nothing else to do, I stare at my foot and admire it. But there is only so much quality time one can dedicate to a well meaning anklet. I feel like it is now drawing unsolicited attentions and some feeble giggles at work. I also think that when I walk to the food counter everyone is pointing to my anklet and engaging in very animated conversations. I want to cut it off but I also don’t want to. I want to wait a month before I do. So, whenever I am walking about at work, I pray to the seed bead deities to get the ones on my ankle to scurry and hide inside my salwar. But isn’t is like the job description of gods to not answer prayers? Maybe I will cut it tomorrow.

I watched the movie Hidden Figures yesterday. An outstanding film I would say. It is a beautiful story about the forgotten women who contributed immensely in turning men into heroes during the space race. That they had to face so many daunting challenges and yet be able to deliver is a real inspiration. It is equally sad that they were so easily forgotten, hidden under all the bling & show, and eventually faded out of memory. I think these women were heroes themselves. I feel happy-proud of them. Very happy, very proud.

Incidentally, I was reading Neither Here Nor There, a hilarious book by Bill Bryson on his travels in Europe. The book is legit funny. There is one place in the book where it gets warm and touching. Outside of this, it is very funny and you should read it.

In chapter 8, there was this passage that tugged at my heartstrings.

Afterwards I strolled on to the Anne Frank House on Prinsengracht. It was packed, but moving none the less. Eight people spent three years hiding in a secret flat above Otto Frank’s spice business, and now an endless line of visitors shuffles through it every day, to see the famous bookcase that hid the secret entrance and the five rooms in which they lived. The tragic part is that when the Franks and their companions were anonymously betrayed and finally captured in August 1944, the Allies were on the brink of liberating Holland. A few more weeks and they would have been saved. As it was, seven of the eight died in concentration camps. Only Anne’s father survived.

The Anne Frank museum is excellent at conveying the horror of what happened to the Jews, but it is a shame that it appears not to give even a passing mention to the Dutch people who risked their own lives in helping the Franks and others like them. Miep Gies, Otto Frank’s secretary, had to find food each day for eight people, as well as herself and her husband, for three years at a time of the strictest rationing. It must have been extremely trying, not to mention risky. Yet this was hardly a rare act: twenty thousand people in Holland sheltered Jews during the war at considerable peril to themselves. They deserve to be remembered too.

As much as Glenn Powell and Katherine Johnson were heroes, so were Frank’s secretary and his family. Right? I am proud of them too. But kinda sad-proud.
Too many unsung heroes. Way too many.

Anyway, I shall stop right here. No, I will stop right after telling you what I have been listening to too many times this week

Bruce Springsteen – If I Should Fall Behind

Frivolously yours,
I remain

I am getting older with each passing day. I no longer have fun theories and/or juicy gossips. (Not like I had any earlier anyway). So I am going to start using social media platform for the purpose it was primarily designed for, viz. Posting abundant pictures of self/babies/crappy-food-posing-as-gourmet. No, no.. The mice made Cats and Dogs their allies when they hired Magrathea to build the Earth. So, cat and dog images can and should be posted and re-posted and worshiped and adored. Compulsorily.

Anyways, So in my cozying up to social media, a line up of challenges await me.

Faced with these obstacles, I have no other choice left. But this. I am going to post pictures of my bought, borrowed, or stolen bric-a-brac, books, fruitless arts & crafts attempts.

This is a pair of ear studs that i bought recently and am totally in love with. I like paintings. I like the Renaissance era. I like watching comedy shows that may have an episode with a stolen painting story line. Do you see how closely I follow art? Good. So I bought these Vincent Van Gogh ‘The Starry Night’ ear studs. For a price so cheap you would think it would be a Wincent Van Ugh reproduction, but no! These are really cool and attracted some really flattering compliments.

Also, please note how I have cleverly placed the ornament on a copy of Van Gogh’s ‘Imperial Fritillaria’ . Jeez, thanks.

The post is over. Thanks for visiting… Wait… for it.

I already know what I am going to brag about next. Watch this space!